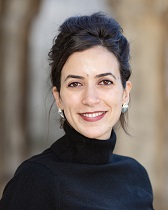 Loubna El Amine teaches political theory, with a particular focus on early Chinese political thought. Her first book, Classical Confucian Political Thought: A New Interpretation, was published in 2015 by Princeton University Press. She is currently working on a second book, tentatively titled Beyond Freedom and Slavery: Status and Membership in the Ancient Confucian Political Community. She holds a PhD in Politics from Princeton University and a BA in Political Studies from the American University of Beirut.