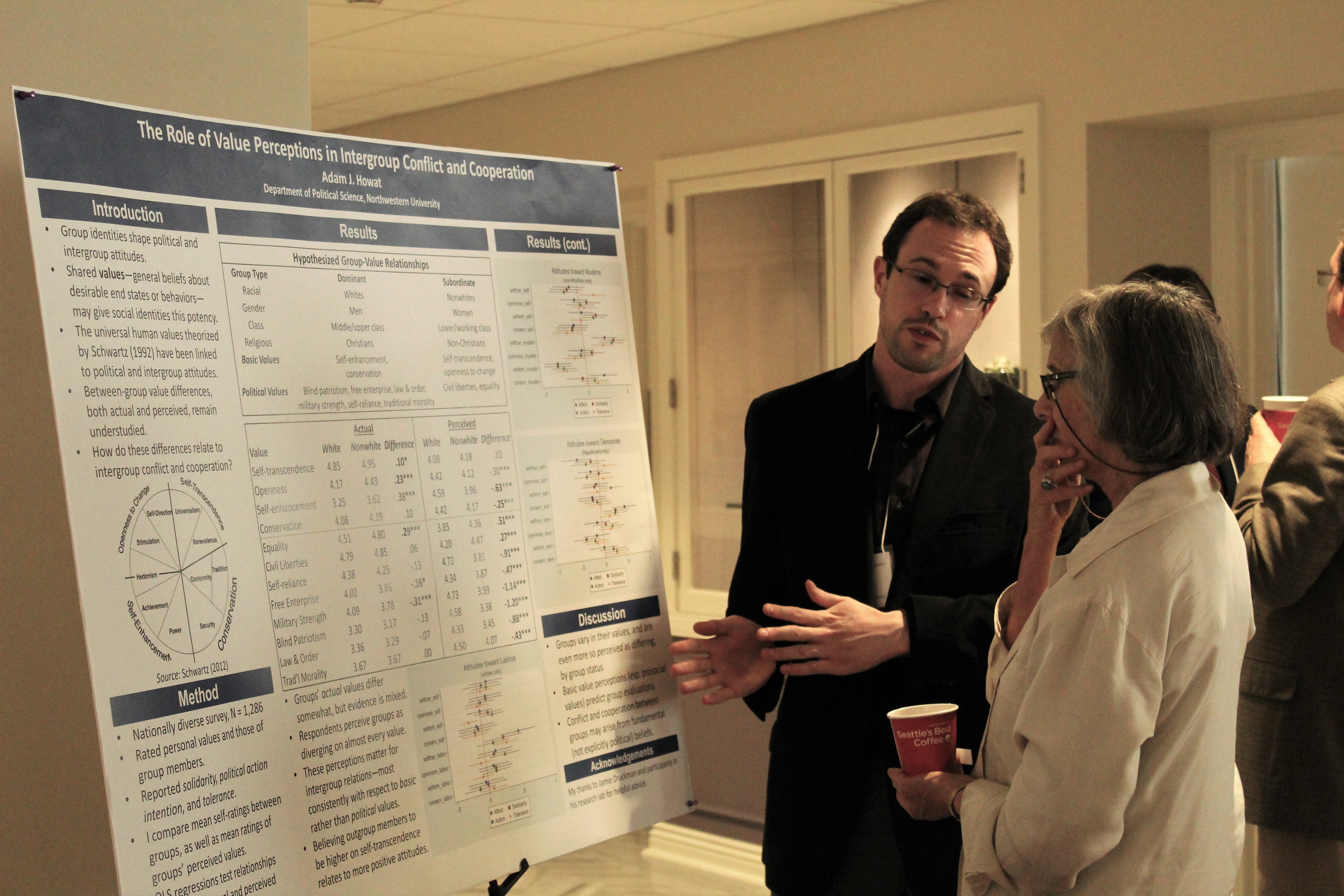 The Role of Value Perceptions in Intergroup Conflict and Cooperation

Tell us about yourself: What are your research interests?

My research broadly investigates intergroup conflict and cooperation—specifically, how individuals’ group identities influence the formation of their political preferences and their attitudes toward other groups. The groups in question might be political parties, racial groups, religious denominations, and more. Much remains to be explored concerning what makes those kinds of identities so powerful when it comes to mass political behavior. I’m especially interested in the connection between social identities and people’s core values—their general beliefs about what’s right or desirable. Because democratic politics involves the resolution of conflict between group interests and competing visions of the common good, it’s important to understand exactly how individual citizens think about these ideas.

Tell us about your poster: How did you arrive at this research project and what are your findings?

The poster presents pieces from two chapters in my dissertation; both analyze data from a nationally diverse survey I conducted. The project sought to answer three main questions: First, do members of different groups (racial, gender, class, religious, and partisan) express different core values? Second, do people believe those groups have different values? And third, how do those beliefs relate to individuals’ attitudes toward those groups? I find that groups do hold some divergent value priorities, but people tend to perceive groups’ values as more different than they actually are. Beliefs about group values also relate in significant ways to a variety of intergroup attitudes, including feelings of solidarity, tolerance, and willingness to engage in political action on behalf of a group.

What’s one surprising thing you learned over the course of your project, either in terms of behavioral methodology or as a result of your study?

Many of the groups I surveyed have more value priorities in common than they think they do. For example, while it’s true that people of color give higher average ratings to the value of equality than whites do, both groups give it at least a 4.5 on a 6-point scale—higher than almost any other value. Similarly, my respondents, on average, believe that men place higher priority on the value of self-reliance than women do, when in actuality there’s no meaningful difference between them. So, in a way, my findings provide a hopeful perspective on intergroup relations: if groups believe themselves to be more fundamentally divided than they really are, that may mean there’s unexplored common ground on which they could build political coalitions.

What are your next steps and how will you incorporate this project into your future research?

While my survey findings tell us a lot about group identities, values, and intergroup attitudes, they don’t enable me to make causal claims about their relationships. For example, does identification with a certain group lead a person to prioritize certain values, or do the values one holds lead to stronger group identification? It seems likely that both of those things are true, and in the future I hope to conduct experimental studies to answer these questions. Currently, I’m preparing to analyze data from a survey experiment I conducted, investigating the joint impact of shared identities and shared values on the evaluation of political candidates. 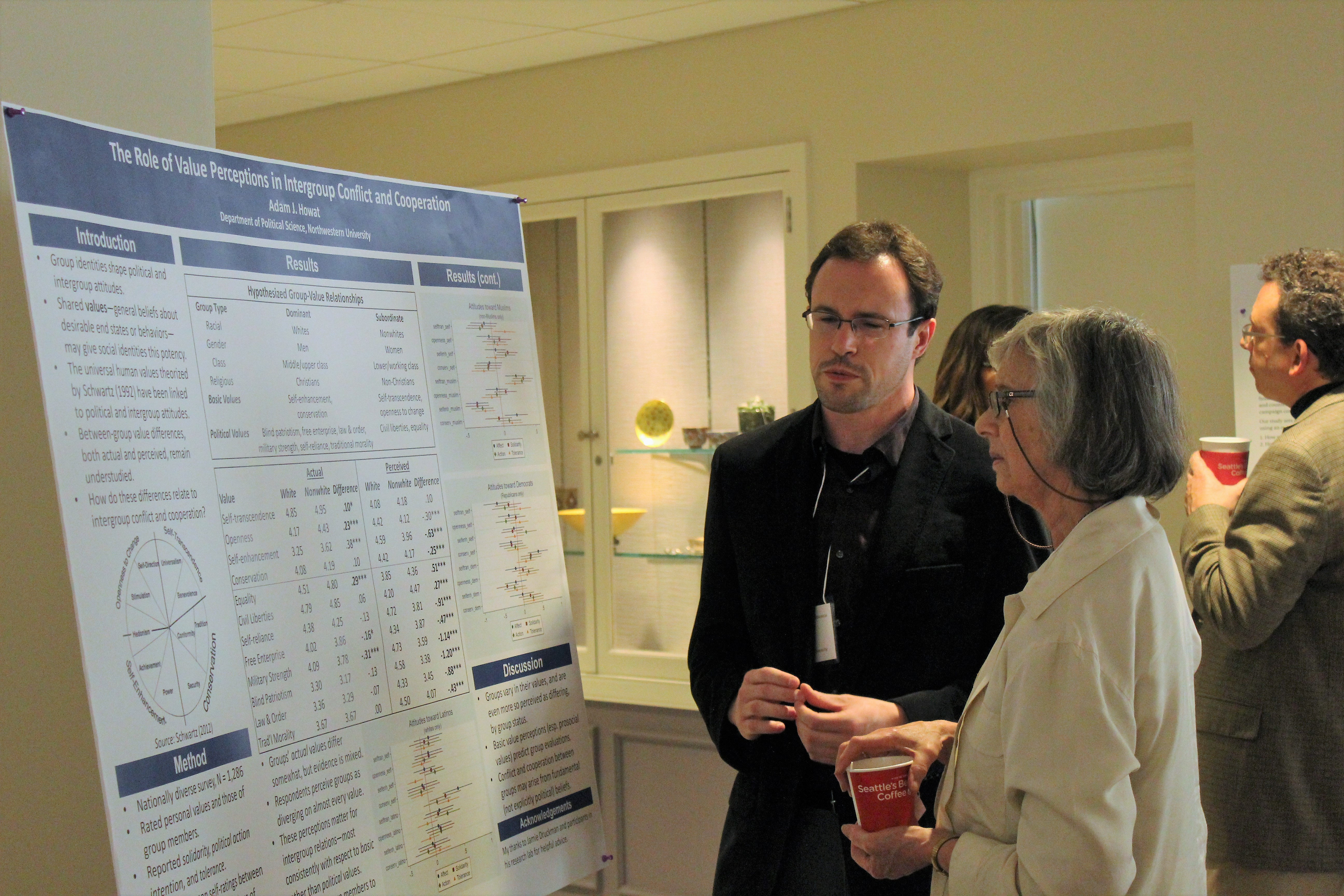 What was the best question someone asked about your poster and how did you address it?

One visitor to my poster asked me what might cause the kinds of value misperceptions I see in my data. We discussed the likely role of political elites and the media, speculating that ordinary citizens might be taking cues from them. That conversation dovetailed with another question I received, asking what might happen if, in an experiment, we told participants that a pair of groups do or do not have many values in common, and then asked them to rate the groups’ values as I had them do for my survey. I think that would be a great, simple first step toward understanding where beliefs about group values come from—and perhaps how to correct misperceptions.

What was your overall impression of CAB 2018 (the presentations, mentorship & networking sessions, presenting your work, etc.)?

As always, CAB was a terrific experience. The organizers did a great job and booked an outstanding slate of presenters. I had a really enjoyable—and informative—lunch with my faculty mentor, as I’ve done all five years that I’ve attended. This was the first time I presented my own work at CAB, and I’m very glad I did. I received a lot of insightful and encouraging feedback on my poster, from some of the best scholars in the field.

What advice would you give to graduate students who are thinking about submitting their poster to future CAB sessions?

It’s absolutely worth it. Putting together a poster can involve a lot of work, but the rewards far outweigh the effort. In addition to the helpful comments I received,  it was an edifying experience to distill the essential takeaways of my research, to figure out how to present a complex project in a clear, concise manner.