Do Individuals Prefer to Lobby Businesses?

Tell us about yourself: What are your research interests? How did you get into academic research?

I first got into academic research after taking part in the McNair Scholars program as an undergraduate. The program provided me with funding for my first academic research project, as well as giving me access to various other resources. I really enjoyed being able to conduct my own research and being able to directly investigate political questions no one else had answered before.

My research interests evolved from my interest in environmental politics. When researching non-profit organizations and public policy, and after investigating non-profit organization’s websites, I noticed that the non-profits would often target large companies for boycotts in order to change corporate policies. This is known as private politics or political consumerism. Private politics refers to lobbying corporations in order to change their practices, often in order to support causes such as human rights and the environment. I look at how individual citizens can interact public politics, also known as governmental politics, with private politics in order to best promote the causes and policies they in which they are most interested. I now research private politics as well as the influence of private businesses on politics.

Tell us about your poster: How did you arrive at this research project and what are your findings?

My project is a survey experiment which tests the relationship between individual’s perceptions of how the government should run as well as the importance of efficacy on private political participation. I created an experiment that would force individuals to choose between signing an e-petition directed at a federal agency or an e-petition directed at a private company.

To measure this, I conducted a survey experiment on undergraduate students. Participants students received two of six possible vignettes. Students received one of three vignettes that either presented government running as a business to be more efficient, emphasized the importance of the time consuming government process in order to insure all voices are heard, or a control. The second set of vignettes received either detailed a previously successful effort with the help of a private company, the help of a government agency, or a control.  After receiving two of these treatments, participants were then asked to make the choice between an e-petition targeting a corporation (private politics) or an e-petition targeting a government agency (public politics). Opinions on how the government should run can be dramatically impacted by reading a vignette. Furthermore, I found evidence to support the conclusion that efficacy is the most important variable when it comes to the choice of public or private politics.

What’s one surprising thing you learned over the course of your project, either in terms of behavioral methodology or as a result of your experiment?

I was surprised to see that participants who thought the government should run like a business were not more likely to turn to directly turn to lobbying a business to achieve a political goal. Even though getting one business to say, lessen their carbon footprint, would likely show results a lot sooner than getting a law passed, people still expect the government to deal with these issues.

What was your overall impression of CAB 2018 (the presentations, mentorship & networking sessions, presenting your work, etc.)? 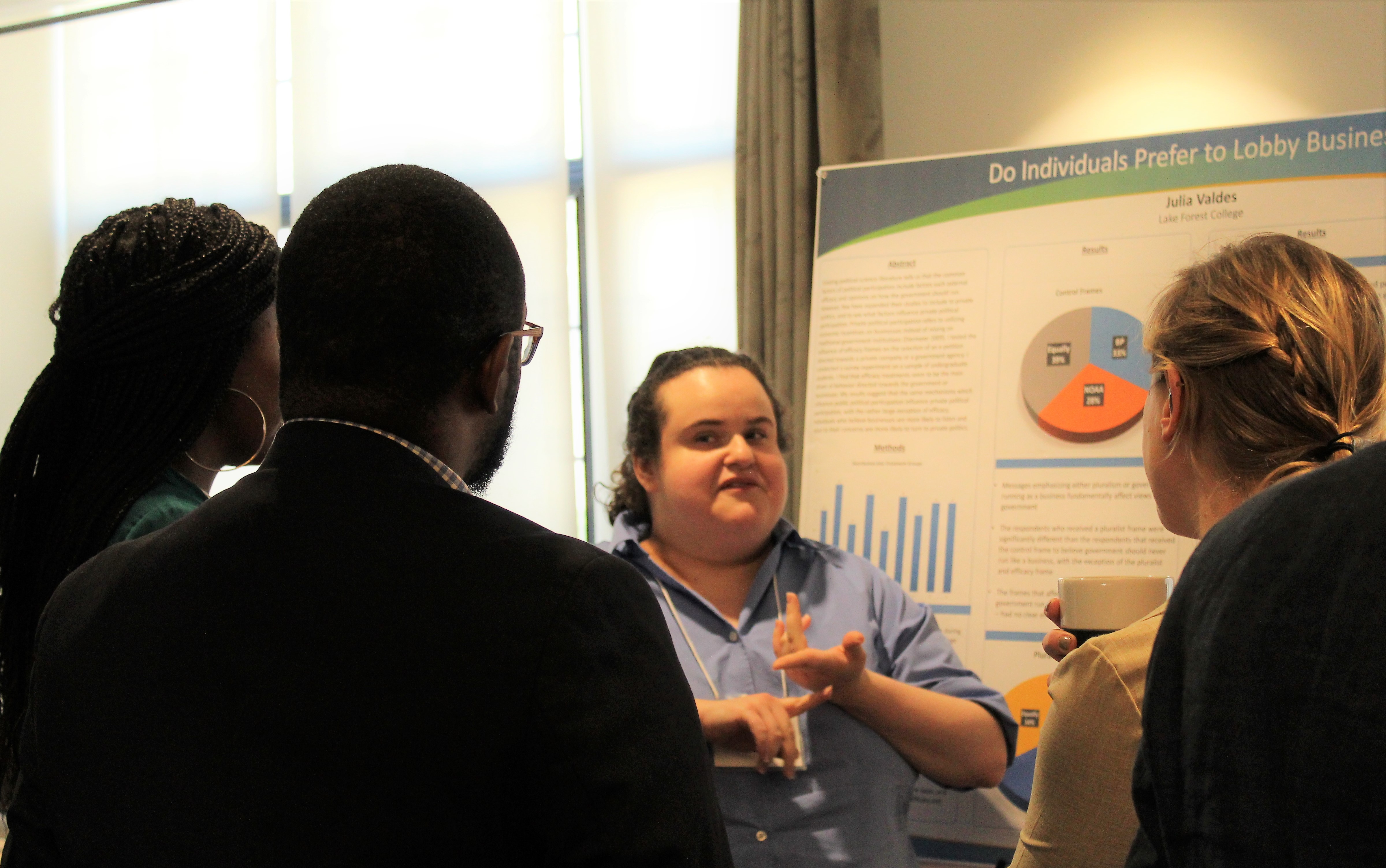 it. The presentations are always fascinating. The size of the conference also really lends itself to great feedback. This was the first time I was a faculty mentor instead of a graduate student. I was nervous about this, but it ended up being a great experience. I was able to give lots of advice about the job market as well as tips I discovered later in graduate school I wish I had known earlier. I also learned a lot from hearing about my mentee's research.

What advice would you give to graduate students who are thinking about submitting their poster to future CAB sessions?

I would encourage them to participate, I really value the feedback I received at CAB. I also would strongly suggest they come with questions prepared, I found that to be very helpful.