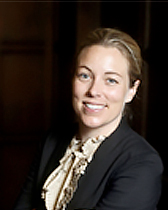 Erin Delaney is an assistant professor at the Law School with a courtesy appointment in Political Science.  Her research focuses on constitutional design and comparative constitutional law, with particular attention to the role of courts in multi-level governance systems.  Prior to coming to Northwestern, she was an Academic Fellow at Columbia Law School and served as a law clerk to Associate Justice David H. Souter of the United States Supreme Court.