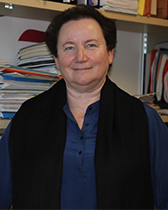 Prior to becoming Vice President for International Relations in 2016, Dévora led the former Office of International Program Development (IPD), which developed and administered exchanges and study abroad programs for Northwestern undergraduate students. During this time, she designed programs in China, Cuba, France, Germany, Israel, Mexico, Serbia and Bosnia-Herzegovina, South Africa, and Tanzania. Dévora also co-founded Northwestern’s undergraduate Program in Global Health Studies in 2004 and was its Co-Director until 2016.

Before joining Northwestern Dévora taught at the University of Illinois in Urbana-Champaign, where she also directed the Center for Latin American Studies and established the Center on European Union Studies.

Dévora earned her bachelor’s, master’s and doctoral degrees at Northwestern and later received a law degree from the University of Illinois at Urbana-Champaign. Dévora was born in Israel and grew up in Costa Rica. She speaks fluent Spanish and Hebrew.