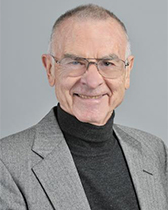 Kenneth Janda has published extensively in comparative party politics, research methodology, and early use of computer technology in political science, for which he received awards from EDUCOM and support from Apple Computer. Major examples are Data Processing: Applications to Political Research (1965); Political Parties: A Cross-National Survey (1980); and The Challenge of Democracy: American Government in Global Politics (2014).  His APSA awards include the Samuel Eldersveld Lifetime Achievement Award (2000) and the Frank J. Goodnow Award for distinguished service to the profession and the association (2009). Dr. Janda and fellow author Jerry Goldman shared APSA technology awards in 1992 for IDEAlog, the computer program, and in 2005 for IDEAlog, the website.  In 2013, he published an iBook, The Social Bases of Political Parties: Democrats and Republicans, 1952-2012 and 2032 on iTunes.