Galya Ben-Arieh, J.D., Ph.D., is a professor of instruction in the Political Science Department at Northwestern University. An international expert in refugee and forced migration studies, she has worked for over 20 years bringing her expertise as an academic and lawyer to broaden our understandings of the rights and processes of refugee protection and the role of law in settlement and inclusion in host societies. A Northwestern University School of Law graduate (’89), she worked as an associate in the Washington, D.C. offices of Pepper, Hamilton and Scheetz before returning to her undergraduate alma mater, the University of Pennsylvania (B.A honors ’86), to complete a doctorate in Political Science (2003) specializing in comparative constitutionalism, American government and immigration policy. Since coming to Northwestern in 2006 she has directed the International Studies Program (2008-2015), creating the IS Honors Program and the Global Café, founded and directed the Center for Forced Migration Studies (2011-2018) and now directs the Colloquium on Refugees, Migrants and Statelessness in the WCAS Center for International and Area Studies. She has brought her interdisciplinary training into her scholarship, teaching and professional work as a community leader and advocate. In 2018 she founded COMPASS – Community Partnerships for Settlement Strategies, a public charity registered in Illinois that works to design effective approaches in support of the long-term wellbeing of refugees and asylees in our communities.

She has been awarded grants from the National Science Foundation, the Social Science Research Council and the Kellogg Center for Dispute Resolution and is a former Senior Fellow at the Käte Hamburger Kolleg / Centre for Global Cooperation Research (University of Duisburg-Essen) and is a consortium partner in the project, Norms and Values in the European Migration and Refugee Crisis (NoVaMigra), a European Union Horizon 2020 research and innovation programme under grant agreement No. 770330. She has conducted field research in the Great Lakes region of Eastern Africa, Germany and the U.S. and has published on testimony and justice, asylum law and policy, refugee protection in a digital age, human rights litigation in transnational courts and citizenship and immigrant incorporation in the US and Germany and is the co-editor of Adjudicating Refugee and Asylum Status: The Role of Witness, Expertise, and Testimony (co-edited with Benjamin Lawrance), Cambridge University Press (2015). From 2013-2018 she served on the executive committee of the International Association for the Study of Forced Migration and has worked as an immigration attorney representing political asylum claimants both as a solo-practitioner and as a pro-bono attorney. 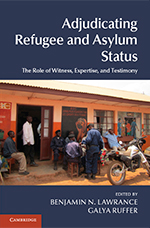